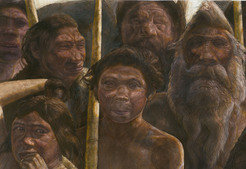 END_OF_DOCUMENT_TOKEN_TO_BE_REPLACED

Illustration: M.Lopez-Herrera via The Olduvai Paleoanthropology and Paleoecology Project and Enrique Baquedano
An artist’s rendition of an early human habitat in East Africa 1.8 million years ago.

Scientists have pieced together an early human habitat for the first time, and life was no picnic 1.8 million years ago.

Our human ancestors, who looked like a cross between apes and modern humans, had access to food, water and shady shelter at a site in Olduvai Gorge, Tanzania. They even had lots of stone tools with sharp edges, said Gail M. Ashley, a professor in the Rutgers Department of Earth and Planetary Sciences in the School of Arts and Sciences.

But “it was tough living,” she said. “It was a very stressful life because they were in continual competition with carnivores for their food.”

It was a very stressful life because they were in continual competition with carnivores for their food.
Gail M. Ashley, professor in the Rutgers Department of Earth and Planetary Sciences