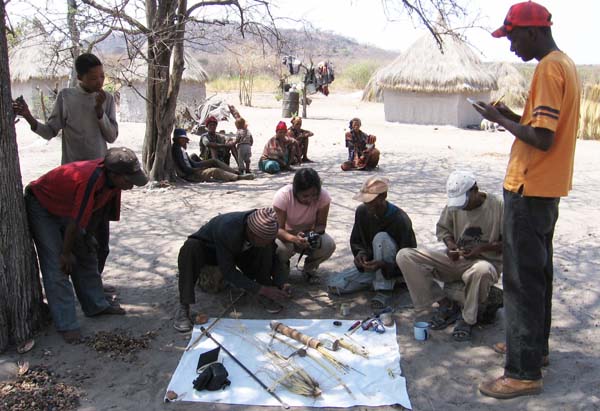 LAWRENCE — While academic awareness of African peoples’ hunting with poison-tipped arrows extends back for centuries, knowledge of the ingenious practice has been scattered among chemistry, entomology and anthropology texts. 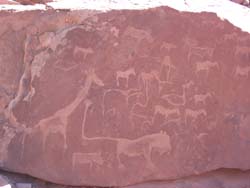 Rock paintings in Namibia depict animals that no longer live in the area.

Now, a comprehensive study of the hunting tradition of the San peoples of Namibia sheds new light on their use of beetle and plant poisons to boost the lethality of their arrows. The research appears currently in the peer-reviewed journal ZooKeys.

“The more slender threads of information I wove together from reports dating to the 1700s, the more obvious it became there were few sure facts and many hard-to-believe assertions,” said lead author Caroline Chaboo, assistant professor of ecology and evolutionary biology at the University of Kansas. “The San are traditional hunter-gatherers and thus have a special place in the history of man. As I learned more about the modern San, their history, weak political status and endangered languages and cultures, it became urgent to me to document this aspect of their culture.”

Chaboo and her co-authors — Megan Biesele of the Kalahari Peoples Fund, Robert K. Hitchcock of the University of New Mexico and Andrea Weeks of George Mason University — synthesized historical and anthropological literature and conducted their own fieldwork to better grasp how the San use beetle arrow poisons. 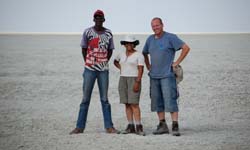 “The fieldwork was an unforgettable experience,” Chaboo said. “Taking all our water and food into the Kalahari, where water was too precious to use for baths. Sleeping in a pop-up tent atop the Range Rover and waking in the middle of the night with hyenas sniffing around the campsite; or sleeping on the ground and feeling the roar of a lion through the ground. Seeing the first amazing rains flooding the Okavango Delta. Being welcomed into the San communities, and having the entire community sit around me and the arrow preparers, and hearing San spoken.”

END_OF_DOCUMENT_TOKEN_TO_BE_REPLACED

“Democratic innovation in the South” is a book edited by Ciska Raventós and participation of many authors, where the promises of democracy, the decline of trust in nation-state as well as the derived economic problems, which citizenry should face, are widely examined. Even if each chapter may be separately read, this text keeps a common thread according to two relevant aspects of politics, the representation of institutions and their commitment in the way of practising the politics. Although it is important to mention the recent process of democratization in Latin America and South has generated a place of inclusion and participation, univocally it seems to be still not enough.

The dichotomies of democracies and the social problems, which she generates, are some of the pending question this book tries to resolve. Some developing countries adopted democracy as primary option of government thinking their material asymmetries will be automatically solved. However, their situation not only has not been improved. Frequently, the implementation of economic policies is done ignoring the demands of citizens; in others, the role of citizens in this process is over-valorised.

Four sections encompasses this compilation, the first refers to the role of civil society in the processes of democratization and its impact on public space. Investigations conduced as Dagnino, Olvera and Panfichi, and Chaguaceda Noriega shows the needs of reconceptualising the importance of participation post dictatorships. The new movement faces serious challenges and problems at time of dialoguing with the former actors that forms the status-quo.  Rather, the second section explores the connection between democracy and social conflict.
END_OF_DOCUMENT_TOKEN_TO_BE_REPLACED