Rickets has been identified in a Neolithic skeleton from the Scottish island of Tiree, making it the earliest case of the disease in the UK, according to research announced at the British Science Festival in Bradford.

This is particularly surprising as the disease – caused by Vitamin D deficiency linked to lack of sunlight – is more commonly associated with the urban slums of Victorian Britain than with rural, farming communities, as existed in Neolithic Scotland. The nature of the grave itself – a simple burial rather than a chambered tomb – has raised questions as to how the woman, physically deformed by the disease, may have been treated by her community.

Professor Ian Armit from the University of Bradford explains: “The earliest case of rickets in Britain until now dated from the Roman period, but this discovery takes it back more than 3,000 years. There have been a few possible cases in other parts of the world that are around the same time, but none as clear cut as this. While we can’t say for certain that this is the earliest case in the world, it is definitely very unusual.

END_OF_DOCUMENT_TOKEN_TO_BE_REPLACED

The discovery of 15 individuals, consisting of 1,550 bones, represents the largest fossil hominin find on the African continent.

“We found adults and children in the cave who are members of genus Homo but very different from modern humans,” said CU Denver Associate Professor of Anthropology Charles Musiba, PhD, who took part in a press conference Thursday near the discovery inside the Rising Star Cave in the Cradle of Humankind World Heritage Site outside Johannesburg, South Africa. “They are very petite and have the brain size of chimpanzees. The only thing similar we know of are the so-called `hobbits’ of Flores Island in Indonesia.”

Homofloresiensis or Flores Man was discovered in 2003. Like this latest finding, it stood 3.5 five feet high and seems to have existed relatively recently though the exact age is unknown.

Caley Orr, PhD, an assistant professor of cell and developmental biology at the University of Colorado School of Medicine, analyzed the fossil hands.

END_OF_DOCUMENT_TOKEN_TO_BE_REPLACED

Have you ever wondered why we call a dog a dog and not a cat? Is this an arbitrary decision, or is it based on iconicity—the resemblance between word structure and meaning? New research shows that for Indo-European languages, like English and Spanish, iconicity is more common than previously believed.

The results are important for understanding the nature of human language, explains Lynn Perry, assistant professor of psychology in the University of Miami College of Arts & Sciences and co-lead author of the study.

“Many linguists are trained to believe that languages are arbitrary.” Perry said. “But sometimes what we as scientists accept as fact leads us to miss out the rich details of experiences,” she said. “We treat learning as this impossibly difficult process because we assume languages are completely arbitrary, but it turns out there’s a lot of structure and information in the language itself that could be making learning easier.”

The study is the first to show that iconicity is prevalent across the vocabulary of a spoken language, explained Marcus Perlman, postdoctoral research associate in the University of Wisconsin-Madison Department of Psychology and co-lead author of the study.

“It is the nail in the coffin for the theory that languages are essentially arbitrary,” Perlman said.

Most people are familiar with onomatopoeia, words that imitate a sound; for example, boing—the sound of a bounce, and zip—the sound of moving at high speed. However, words can be imitative or iconic of many different kinds of meanings, not just sounds. For instance, the vowels in the word “tiny” sound small compared to the vowel in “huge,” which sounds big.

“Scientists have known for a while that people are sensitive to iconicity,” Perry said. “If you show people a novel pointy object and a novel round object, and ask them ‘which of these is a ‘kiki’ and which is a ‘bouba,’’ they are more likely to say that a pointy object is called ‘kiki’ and the round one is called ‘bouba,’ because they sound more pointy and round, respectively.”
END_OF_DOCUMENT_TOKEN_TO_BE_REPLACED

New analysis shows warship’s dried fish provisions were sourced from as far away as Icelandic and possibly even transatlantic waters. Researchers show how boom in fishing trade helped fuel the growth of the English navy, and vice versa.

“The story of the cod trade is a microcosm of globalisation during this pivotal period that marked the beginning of an organised English navy, which would go on to become the Royal Navy”(James Barrett)

New stable isotope and ancient DNA analysis of the bones of stored cod provisions recovered from the wreck of the Tudor warship Mary Rose, which sank off the coast of southern England in 1545, has revealed that the fish in the ship’s stores had been caught in surprisingly distant waters: the northern North Sea and the fishing grounds of Iceland – despite England having well developed local fisheries by the 16th century.

Test results from one of the sample bones has led archaeologists to suspect that some of the stored cod came from as far away as Newfoundland in eastern Canada.

The research team say that the findings show how naval provisioning played an important role in the early expansion of the fish trade overseas, and how that expansion helped fuel the growth of the English navy. Commercial exploitation of fish and the growth of naval sea power were “mutually reinforcing aspects of globalisation” in Renaissance Europe, they say.

“The findings contribute to the idea that the demand for preserved fish was exceeding the supply that local English and Irish fisheries were able to provide in order to feed growing – and increasingly urban – populations. We know from these bones that one of the sources of demand was naval provisions,” said Dr James Barrett, from the McDonald Institute for Archaeological Research at the University of Cambridge.

END_OF_DOCUMENT_TOKEN_TO_BE_REPLACED

An international team led by researchers at Uppsala University reports a surprising discovery from the genomes of eight Iberian Stone-Age farmer remains. The analyses revealed that early Iberian farmers are the closest ancestors to modern-day Basques, in contrast previous hypotheses that linked Basques to earlier pre-farming groups.

The team could also demonstrate that farming was brought to Iberia by the same/similar groups that migrated to northern and central Europe and that the incoming farmers admixed with local, Iberian hunter-gather groups, a process that continued for at least 2 millennia.

The study is published today, ahead of print, in the leading scientific journal Proceedings of the National Academy of Sciences of the USA, PNAS.

Most of the previous studies about the transition from small and mobile hunter-gatherer groups to larger and sedentary farming populations have focused on central and northern Europe, however much less in known about how this major event unfolded in Iberia. This time, the research team investigated eight individuals associated with archaeological remains from farming cultures in the El Portalón cave from the well-known Anthropological site Atapuerca in northern Spain.

“The El Portalon cave is a fantastic site with amazing preservation of artefact material,” says Dr. Cristina Valdiosera of Uppsala University and La Trobe University, one of the lead authors.

END_OF_DOCUMENT_TOKEN_TO_BE_REPLACED

The discovery was made after the researchers recovered a fossil tibia (shin bone) belonging to the species of extinct monkey Antillothrix bernensis from an underwater cave in Altagracia Province, Dominican Republic. The fossil was embedded in a limestone rock that was dated using the Uranium-series technique.

In a paper published this week in the well renowned international journal, the Journal of Human Evolution, the team use three-dimensional geometric morphometrics to confirm that the fossil tibia does indeed belong to Antillothrix bernensis, a primate that we now know existed on Hispaniola relatively unchanged for over a million years. This monkey, roughly the size of a small cat, was tree-dwelling and lived largely on a diet of fruit and leaves.

Dr Helen Green of Melbourne University’s School of Earth Sciences, a lead researcher involved in the dating of the limestone surrounding the fossils, said the question of the age of primate fossils from this region has puzzled scientists since the days of Darwin and Wallace.

END_OF_DOCUMENT_TOKEN_TO_BE_REPLACED

Professor Tim Beach and Professor Sheryl Luzzader-Beach in the tropical lowlands of Central America. Image provided by Tim Beach, Department of Geography and the Environment

AUSTIN, Texas — Evidence from the tropical lowlands of Central America reveals how Maya activity more than 2,000 years ago not only contributed to the decline of their environment but continues to influence today’s environmental conditions, according to researchers at The University of Texas at Austin.

Synthesizing old and new data, researchers were the first to show the full extent of the “Mayacene” as a microcosm of the early anthropocene — a period when human activity began greatly affecting environmental conditions.

“Most popular sources talk about the anthropocene and human impacts on climate since the industrial revolution, but we are looking at a deeper history,” said lead author Tim Beach, the C.B. Smith Sr. Centennial Professor of Geography and the Environment. “Though it has no doubt accelerated in the last century, humans’ impact on the environment has been going on a lot longer.”

By looking at Maya impacts on climate, vegetation, hydrology and lithosphere from 3,000 to 1,000 years ago, researchers propose that the Maya’s advanced urban and rural infrastructure altered ecosystems within globally important tropical forests.

END_OF_DOCUMENT_TOKEN_TO_BE_REPLACED

3D imaging of a mummified kestrel that died due to forced overeating provides evidence that the ancient Egyptians bred birds of prey as offerings for the gods, according to a new study published in the Journal of Archaeological Science. The digital CT imaging revealed that the kestrel was force-fed its last meal – a mouse – suggesting it was kept in captivity.

This is the first evidence to point to mass breeding of raptors as offerings to gods. The researchers behind the study, from the American University in Cairo, Stellenbosch University and the Stellenbosch Institute for Advanced Studies say their findings also have implications for the use of birds of prey in falconry for hunting.

Animal mummies were common in ancient Egypt and used in religious ceremonies, often as offerings. Millions of mummified animals have been found, most dating from around 600 BC to AD 250. Ancient Egyptians believed in many gods and associated different animals with them; raptors like kestrels were connected to the sun god Re.

END_OF_DOCUMENT_TOKEN_TO_BE_REPLACED 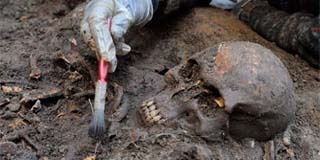 New analysis carried out on skeletons discovered in a centuries-old mass grave in Durham, UK, has led experts to conclude they are the remains of Scottish soldiers taken prisoner after the 1650 Battle of Dunbar.

Researchers at Durham University concluded that the identification of the remains as the Dunbar prisoners was “the only plausible explanation” when scientific data was analysed alongside historical information.

Find out more on the Scottish Soldiers Project web pages.

An archaeologist has 3D-printed a replica of an iron-age artefact to revive a rich musical culture in ancient Ireland.

Billy Ó Foghlú, from ANU College of Asia-Pacific, has found evidence that the artefact may have been a mouthpiece from an iron-age horn and not a spearbutt as previously thought.

When Mr Ó Foghlú used the replica artefact as a mouthpiece, the ancient Irish horn had a richer, more velvety tone.

“These horns were not just hunting horns or noisemakers. They were very carefully constructed and repaired, they were played for hours. Music clearly had a very significant role in the culture.”